Can A Green Card Holder Be Deported From The United States? 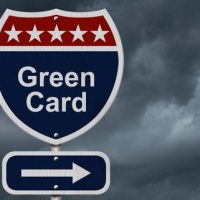 When an immigrant or a non-citizen is inside of the country, they have to walk a thin line between following specific laws and working not to do anything that would get them tangled up with the law. Failure to do so would often mean deportation. However, even green card holders are not immune from deportation if they violate the rules. These permanent residents are not shielded from deportation, specifically in cases where fraud is present.

It is legal United States citizenship that safeguards a person from deportation. That does not mean that citizenship protects one from the implications of the criminal justice system. Breaking the law will come with criminal penalties; it is just that deportation may not be one of the repercussions a legal citizen has to worry about.

If you are facing deportation, this is a scary and overwhelming situation to be in. Figuring out your options and what you can do to keep your status and stay in the country without being hassled is vital. For help with this, the Atlanta deportation defense attorneys at Shirazi Immigration Law, Inc. are here for you.

When Can Permanent Residents Face Deportation?

There are many ways that a green card holder may be subject to deportation, including, but not limited to, the following:

The list above illustrates just some of the ways that a green card holder in the United States could engage in behavior that would make them vulnerable to deportation. Usually, in many cases, individuals in this situation should know that they are entitled to their day in court. It is imperative to defend yourself against deportation, and having an attorney supporting you with this is highly recommended.

Going to immigration court can be scary. Making your case in court is essential. An experienced attorney will know what strategies to use when you are looking at being removed from the country or when you are at risk of being deported.

It is possible to defend against deportation successfully and secure your place in the United States, but having a knowledgeable attorney who fully understands immigration law is critical to meeting this objective. For a free consultation with one of the seasoned Atlanta deportation defense lawyers at Shirazi Immigration Law, Inc., please call 404-523-3611 for the Atlanta office and 771-532-8465 for our office in Hidalgo, Mexico.

By Shirazi Immigration Law, Inc. | Posted on November 14, 2022
« The Current State Of DACA
4 Most Common Visas Issued By The United States »